Skip to content
You are here:Home-Articles, Health and Wellness-Food, fun & families: Prioritizing time (and reaping the benefits) in 2019

Food, fun & families: Prioritizing time (and reaping the benefits) in 2019

Kathy Biernbaum of Springfield, Nebraska, brings out her recipe for quality family time every holiday season – it involves copious amounts of flour and frosting.

“My mom always did cookie cutouts with frosting,” she says. “I still have that Pillsbury cookbook; it’s from 1955.”

For Kay and Mike Glynn of Hastings, Iowa, quality family time often involves working up a quality sweat. (If you know Kay, once dubbed “America’s Fittest Grandmom,” that won’t come as a surprise.)

“My mom turned 95 on Dec. 11, so we picked her up and took her with us to Sky Zone. She watched all of us play at the trampoline park,” says Kay, 65, who did her first flip that day. “When we were done, we met up with 30 other family members for dinner, presents and cake. The next day, I took the grandkids roller skating before they had to travel back home.”

From their home base in North Platte, Nebraska, Phil and Lynda Ham take family time – family by family.

“With everyone in such far-flung places – from North Carolina to Montana – it’s hard to get everyone together, especially now that we have four teenage grandkids to go along with three more approaching (that age),” Phil says.

Over the holidays, Phil and Lynda were able to host most of the kids (they have four) and grandkids (seven). They did what they love to do together – attend church services and eat good food, including a prime rib Christmas dinner. They played games, encouraged bond-building among the cousins, and “told tall tales (maybe even some true ones),” Phil says. 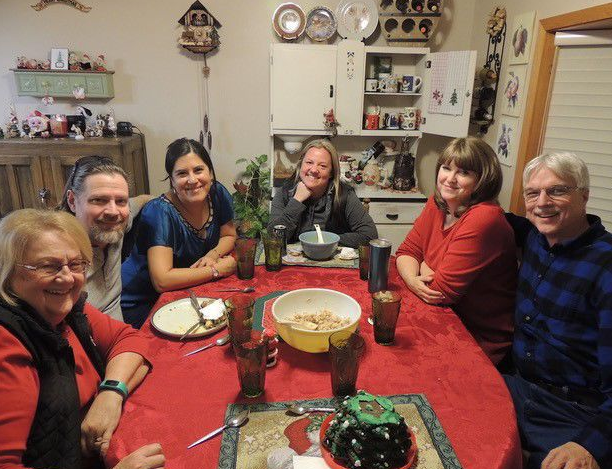 Study after study has shown that families who spend time together – whether it’s game nights, outdoor excursions or simply gathering around the dinner table – build stronger emotional connections, communicate more effectively with one another, and have emotionally healthier, higher-performing kids who are more likely to avoid risky behaviors.

For grandparents, family time can bring bouts of wellness-inducing laughter and activity as well as a chance to share family history. Beyond that, the mixing of generations can encourage a very healthy stage of aging called generativity, “where the elderly feel like they’re valued, contributing and giving back to the next generation,” says Michael Vance, Ph.D., director of Behavioral Health Services at Children’s Hospital & Medical Center.

Kathy is thrilled she has been able to pass on her mom’s cookie decorating tradition to her two creative children – an architect (Jeff) and a graphic designer (Wendy). “We’ve had some pretty fantastic pieces,” Kathy says. 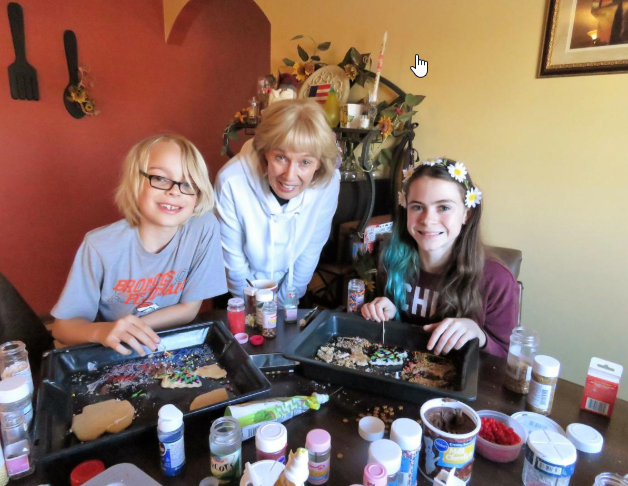 Kathy Biermbaum and her grandchildren.

Like a glob of buttercream icing on a sugar cookie star, the tradition has spread from there. In December, Kathy hosted Wendy, Wendy’s son Chase and Chase’s cousin Lizzie for some “Nailed It”-style cookie decorating. (The “Nailed It” premise challenges everyday bakers to re-create complicated confections.) Of course, Chase and Lizzie – nailed it.

“We try to get the decorating in one or two weeks before Christmas, and just enjoy the time to be together, to really be creative and have fun with it,” Kathy says.

For the Glynns, gathering with their family in December was actually a break from recent tradition. Instead, for the last three years, they’ve enjoyed celebrating Christmas in August with their three grown children and spouses, eight grandkids and Kay’s mom.

“Everyone loves it,” Kay says. “It helps lessen the stress in December, and the cousins love being outdoors playing in the sprinkler, playing at the parks and going to the swimming pools. We exchange gifts and eat the traditional holiday food.” 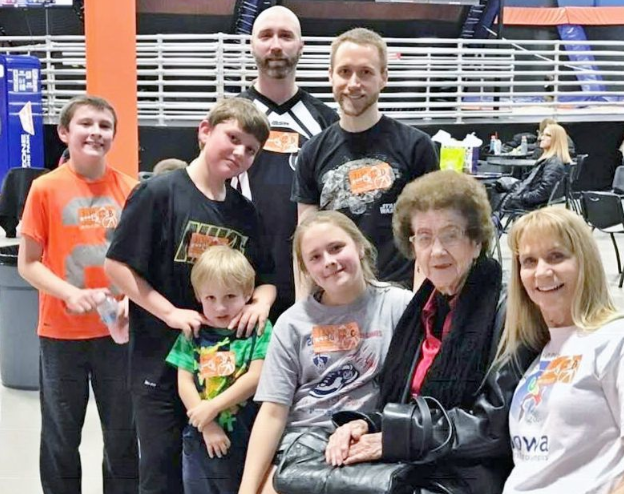 Kay says she foresees spending a lot of time on the road in 2019 “staying connected with people that I love and activities that I love to do.” That includes a trip to Wisconsin and the USATF Masters National Indoor Heptathlon, where Kay will compete, at the end of January. Did we mention that Kay is something of a legend, a nationally renowned track and field phenom?

After returning to the sport at age 48 (after a 30-year hiatus), Kay has competed in the Senior Olympics in Iowa, Nebraska, South Dakota, Kansas and Missouri, among a flurry of other coast-to-coast events. On top of that, she stays active with her tap group. Over the holidays, they performed at area tree lightings, care centers and Oak View Mall in Omaha.

“My mom hasn’t missed watching our performances since we started over 10 years ago,” Kay says.

In 2019, when Phil and Lynda’s family is scattered again, they’ll keep in touch by phone, text and email. A colon cancer survivor, Phil says family time is too important to not make time for it: “Life is too short to end it by regretting the things you haven’t done instead of rejoicing in things you were able to do.”

For Kathy, whether it’s cookie decorating or getting together for the biennial Biernbaum family reunion, being together with kin, quite simply, fills her with joy: “It’s a real pleasure seeing everyone happy, smiling and enjoying each other. Those things, you can’t beat it. It keeps you going. Sometimes you think, ‘Oh, the planning …,’ but it’s so worth it.”