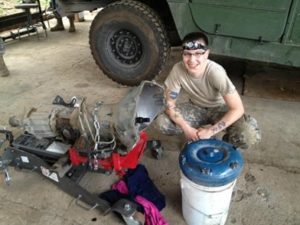 Battaglia is one of the many veterans and employees involved in BCBSNE’s employee resource group, Military Families United Together. This community supports veterans and military families as well as welcomes anyone who wants to become more educated on issues and stories surrounding the military.

Battaglia started his journey at BCBSNE in a temporary data analyzing role. This position eventually became a full-time opportunity. In his three years spent at the company, Battaglia has worked his way up to a higher-level position that involves testing BCBSNE’s new claim system.

Before he made his way to BCBSNE, Battaglia served in in the National Guard. However, this wasn’t the initial trajectory of his college years.

Starting at the University of Nebraska at Omaha (UNO), Battaglia quickly came to the realization that college wasn’t the place for him. Classifying himself as a hands-on learner, Battaglia couldn’t sit still in a classroom and felt the urge to leave campus life. At 20 years old, he unenrolled in the university.

Leaving college, all Battaglia knew was that he wanted to do something important. Taking a leap of faith, he found a military recruiter and said, “let’s do this.”

Battaglia began his service as a welder in the mechanical maintenance unit. This position primarily deals with demolition and breaking things apart – a skill he finds applicable to his current role at BCBSNE.

By the end of his eight-year contract, Battaglia was ranked as a sergeant. This technical, leadership role challenged him with the training and management of both new and old soldiers. In addition, he oversaw the execution and accountability of his team.

“In the army, everything is very short-notice, spontaneous and at times, needed in a hurry,” said Battaglia. “You’re told one thing and then ten minutes later, we have to turn it around or change the schedule to do this. This fits my current role pretty well. I have meetings and assignments that disappear or come in at a high priority. Things are constantly changing.”

Battaglia’s time management skills developed during his service have provided him with the ability to quickly adapt and attack any challenge that comes his way.

“I am able to shift my time, effort and focus on short notice,” said Battaglia. “I find this skill incredibly valuable in both my professional and personal life.”

In the next couple of months, BCBSNE is helping Battaglia become a certified medical coder through the company’s tuition reimbursement program.

“This is a deeper dive into a different side of claims,” said Battaglia. “It’s a way to work up in the company. I am in a level two position (of three levels), and I continue to learn something new every day. I hope to hold a leadership position in the company within the next five years—and continue to apply the skillset I built during my time serving our country.”

On behalf of BCBSNE, we extend gratitude and appreciation for all veterans. Thank you for your service and the sacrifices you made for our country.

About the Author: Mary Kate Phelan