Skip to content
You are here:Home-Articles, Community Engagement-BCBSNE employees get active in the community

BCBSNE employees get active in the community

In the month of June, Blue Cross and Blue Shield of Nebraska (BCBSNE) had the opportunity to work with the community through multiple active events.

Here is what BCBSNE engaged in during the month:

BCBSNE kicked off the month as a silver sponsor of the Bike with Mike event on Saturday, June 4.

Bike with Mike was created after Mike Kutilek manifested mental illness and passed away in May of 2020 at the age of 29. The Kutilek family organized the bike ride event with Community Alliance to bring awareness to mental illness.

“I am so grateful BCBSNE presented an opportunity like this to highlight the need for mental health resources in our community and show support for those suffering,” says Clare Longo, a software release coordinator for BCBSNE and Bike with Mike participant. “Many of my friends and family have been affected by mental illness, so I felt personally connected.”

The Omaha Take Steps Walk took place on June 4 at Werner Park in Papillion, Nebraska. This event benefitted the Crohn’s and Colitis Foundation and was both virtual and in-person.

Participants walked in teams or individually to raise funds allocated toward research on a cure for inflammatory bowel disease.

BCBSNE had a booth at the event and honored Derek Wakefield, a former BCBSNE employee who was active on the BCBSNE Take Steps team and passed away on Feb. 1, 2022.

“BCBSNE’s sponsorship and team donations shows we are here for the community and support them along their journey. I am so proud to be BLUE. Working for a company that gives back shows we care about the people in our community,” says Darcy Swope, team leader for the BCBSNE Take Steps Walk.

Team Blue was able to raise $2,274 at the time of the event. The BCBSNE team was honored as part of the top five corporate teams who raised the most funds for the Take Steps walk.

The route of the event spanned from Alliance to Wahoo, with fun Nebraska sightseeing stops, such as Carhenge along the way. Members of host communities along the route supplied meals for participants.

BCBSNE was a proud sponsor of this year’s event, and BRAN bestowed scholarships on behalf of BCBSNE to two students.

Pink Gorilla Run Club held Cornfield Cornfield 10K, the most “Nebraska” race in Nebraska on Saturday, June 11. The 10K race, a part of the Born and Raced In Nebraska (BRIN) running series, was powered by BCBSNE. 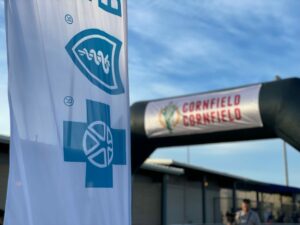 “By being involved and having a large number of employees actually run the race, it shows that we are willing to practice what we preach,” says Matt Witkowski, life safety specialist at BCBSNE and Cornfield Cornfield runner.

Participants started their run at Werner Park in Papillion. Held on National Corn on the Cob Day, Cornfield Cornfield was created to encourage a healthy lifestyle for local Nebraskans. The event also had a costume contest, watermelon and of course, corn.

BCBSNE got involved with this year’s Rollin’ to Colon event on June 19 as a bronze sponsor.

Rollin’ to Colon is an annual bike ride benefitting the Great Plains Colon Cancer Task Force. With 53-, 30-, 20- and 10-mile rides as well as a kid’s bike event, riders of all ages and abilities took part in this event.

The Great Plains Colon Cancer Task Force will use all proceeds in Nebraska to bring awareness to colon cancer and early detection.

About the Author: Ella Geraghty

Ella is a communications intern in the Marketing and Communications department at Blue Cross Blue Shield of Nebraska. In her role, she assists in the writing process across a variety of platforms.