In honor of Memorial Day, BCBSNE employees share their stories

In honor of Memorial Day, two Blue Cross and Blue Shield of Nebraska (BCBSNE) employees from the employee resource group Military Families United Together shared their stories to encourage others to reach out for support.

Military Families United Together is a BCBSNE employee resource group that supports veterans and military families and welcomes anyone who wants to become more educated on issues and stories surrounding the military. 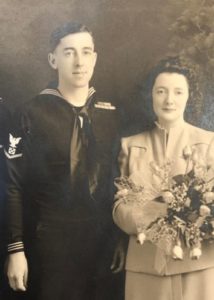 Even though Matthew Pleggenkuhle, business process manager at BCBSNE and Military Families United Together member, has never served, he has been greatly influenced by those who have.

“Many of my greatest role models have served,” said Pleggenkuhle. “My grandpa Earl served in the Navy during World War II off the coast of Japan.  My grandpa Tom served in the Navy during the Korean War.  My dad and my uncle Daryl both served during the Vietnam War.  My sister Samantha serves in the Army Reserve and spent a year in Kosovo.  Her husband Sean had tours in Iraq and Afghanistan with the Army Special Forces.”

Pleggenkuhle knows how big of a sacrifice veterans and active duty members make.

“For those who serve or have served in the United States Armed Forces, my hat is off to you, and you have my sincere gratitude,” said Pleggenkuhle. “For family members of active military members, my heart is with you.”

Pleggenkuhle finds that participating in Military Families United Together has helped him further his appreciation for those who serve and their loved ones.

“It has to be scary to be at home when a loved one is taking on such a high-risk job away from home,” he said. 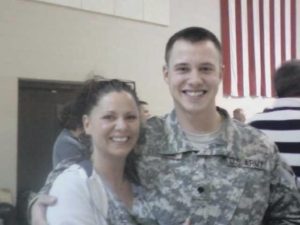 Josh Cecetka, plan performance auditor and president of Military Families United Together, shared his experience from his time serving overseas.

“It had been a long flight; 13 hours, I believe, with the pit stop in Iceland to refuel and more to go,” said Cecetka. “Everyone was shoulder-to-shoulder, strapped in tight as all the cargo. We flew another seven hours.”

Cecetka was traveling to Iraq for his first deployment from 2005 to 2006.

“Once we landed in Kuwait, we only had another four-hour drive to our base,” said Cecetka. “This is where we began our two-week acclimation period to the 100 plus degree weather of the desert. The sun was rising, and against the horizon, it appeared redder than I had ever seen it. The journey that laid ahead of me in the next 13 months of my life without a doubt changed me forever.”

After completing his contract with another deployment to Kuwait, Cecetka received his bachelor’s degree, started a family, moved to Omaha and began his work at BCBSNE in 2016 where he found community in Military Families United Together.

“I wish to find companionship, educate and support all those who are interested in the group,” said Cecetka. “You may or may not feel the presence of military folk in your daily lives, but they do affect how we live our lives.”

About the Author: Amanda Minckler

Amanda is a communications strategist at Blue Cross and Blue Shield of Nebraska (BCBSNE). She enjoys writing about various subjects, but especially enjoys working on feature stories on the people who make BCBSNE a special place to be.