Skip to content
You are here:Home-Articles-Topics-Team Blue-Going abroad? Travel medical insurance is smart protection in event of injury, illness

Retirees Scott and Trudy Darling are treating themselves to the world, a reward for a job well done during their pre-retirement years.

“It was such a busy time raising three kids and working, but we always talked about the places we wanted to go. That’s what we’re doing now,” says Scott, 69, a former vice president of communications for Woodmen of the World.

Intent on traveling as much as they can, the Darlings have collected memories in Greece, Italy, France and England, and recently returned from cruising the Danube River. The two-week trip, with 20 friends, took them to Poland, the Czech Republic, Germany, Slovakia and Hungary, where the goulash made a lasting impression.

“I loved the ethnic food and drink of each country. We learned to say ‘cheers’ in every language,” says Trudy, 67, a retired kindergarten teacher with Omaha Public Schools.

Scott was especially struck by the sight of Budapest at night: “You see the lights as you come down the river, and it’s just beautiful.”

The trip was smooth sailing for the Darlings. 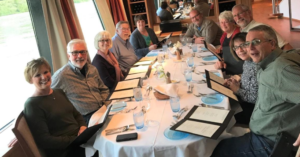 “I just celebrated the fifth anniversary of the incident,” says the 52-year-old Freeman, director of account management and service for Blue Cross and Blue Shield of Nebraska.

She was on vacation with her oldest daughter, Latoya. After a morning spent snorkeling, the duo set off on a guided all-terrain vehicle (ATV) excursion.

“We were going uphill. I hit a rock and my ATV flipped over,” Freeman recalls. “At the time, I wasn’t aware of the extent of my injuries. My daughter wouldn’t allow me to look. I just knew I was in tremendous pain.”

Freeman suffered a double compound fracture of her left ankle. When she arrived by ambulance at a private hospital, “the first thing they wanted to know was my ability to pay. That’s when you find out that your insurance card doesn’t necessarily travel everywhere you go. Or, if it’s a payable service, you may need to pay up-front.”

To proceed with surgery, Freeman had to put  $15,000 in medical expenses on her credit card. Another $15,000 was due at discharge three days later.

Since her accident, her employer has begun offering a policy called GeoBlue  Travel Medical Insurance.

With GeoBlue, there are no upfront payments for medical treatments and no claims to submit. Travelers also have access to a network of English-speaking doctors in 190-plus countries.

“Not only would I have been able to have GeoBlue work directly with the provider, I would have had someone who could translate everything that was happening,” Freeman says.

Short- and long-term GeoBlue plans are available, regardless of whether you are enrolled in a BCBSNE health plan.

Freeman says she won’t travel internationally without GeoBlue. “I was eventually reimbursed, but it wasn’t at that moment when I needed it.”

Compared to Freeman’s ordeal, the Darlings’ travels have been largely problem-free, but they still know the value of precaution. They always make sure at least one of their kids has copies of their passports and drivers’ licenses, for example.

For additional peace of mind when traveling abroad, here are five tips from Lakelyn Hogan, a gerontologist with Home Instead Senior Care: